I’m not supposed to bother famous people when I’m at work, which is usually not a problem. But I knew HE was coming. He was singing the 7th Inning stretch that day which meant he had to stop in the WGN radio booth to the left of me, talk with them for half an inning, then walk over to the WGN TV booth to the right of me. He would have to walk right past where I was working. If I stood in the doorway and hung as far into the hall as the cable on my headset would allow, it would be downright rude of me to not say hello and offer my hand. And so I did. He shook my hand and smiled and said hello back then went on his way to the TV booth for half an inning of talking and singing Take Me Out To The Ballgame. Had it been anybody else, that would be the end of my story, but this was Ernie Banks. After he sang he had to walk past the visitor’s booth again. This time, it was he who stopped me. He stopped by to talk to ME. He asked me some questions. Asked me where the Cubs catcher was from. I looked it up in the Media guide for him. He thanked me. Maya Angelou has a great quote that goes something along the lines of, people will forget what you say and they will forget what you do, but they will never forget how you made them feel. Ernie Banks made me feel like I mattered that day. Just a short stop off on his way out to say hello and I’ll never forget it. His attitude toward life, toward others, and toward baseball is to be envied and emulated whenever possible. I am grateful to have had the chance to meet him a couple of times. May he rest in peace, and if there’s a heaven, may he be there right now smiling and running and putting together a couple of teams to play at least two games before the sun goes down. 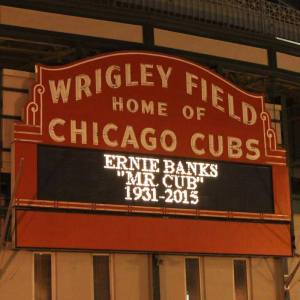