There’s magic in words, some of it black magic. Words can carry with them painful connotations derived and held onto from past experiences, like the name of the guy your high school sweetheart dumped you for, or the title of the song that was playing while she did it. Words and songs and phrases can transport you to another time and another age when the wounds were fresh, carrying with them the association of loss, of dashed hopes, of long-forgotten pains that float to the top when you hear them again.

For me, one of those phrases has been popping up a lot lately. It’s on the Facebook feed and in the newspapers and bandied about by news anchors as if it were some joyous thing to be celebrated, but I know better. I’ve been here before.

I wasn’t yet twelve years old at the time, though that milestone was approaching. Summer had been sweetened by an emerging appreciation of curls and curves and perfume scented breezes. The buzz of pre-pubescent ardor hummed a constant current through the days 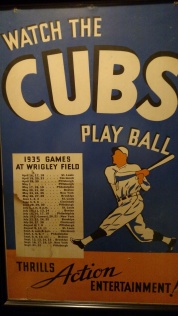 I got where I needed to be on bicycle, usually with a mitt dangling from the handlebars. The truth is, there were few places I needed to be. There’s a freedom at that age that isn’t experienced again in life. From grass-cutting-job-days to nights at the neighborhood pool to little league games, it was summer with a capital ‘S’, free and easy and dusty and fun. I teetered there on the edge of boy and teen, those childish things not yet put away, but their days certainly numbered.

The summer of 1984 was a magic summer, complete with its own magic number. 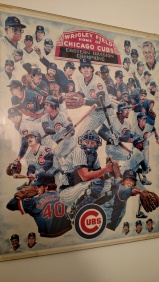 From birth I was a Catholic, a Chicagoan, and a Cub Fan. Sitting here now at forty-three years old, eleven years doesn’t seem very long, but in 1984, eleven years was a lifetime. In that lifetime, I’d taken a lot of flack for being a Cub fan. Back then, the White Sox, those South Side Hitmen of the 70’s, the Winnin’ Ugly Division Champs of ’83, they were the city’s team. The Cubs were the team of old ladies in floppy hats and shirtless beer-guzzling men who could somehow get to the ballpark in the middle of the afternoon on a daily basis while everyone else was at work, the ones

Lee Elia famously referred to the summer before as the “dumb fifteen motherf*ckin’ percent that come out to day baseball”.
My team had been the loveable losers, a dominant force during the first half of the twentieth century and near perennial basement dwellers throughout the second half.

There was the lore of that magical 1969 season passed down by elders who’d been alive to witness it. I’d heard the stories of Banks and Williams and Santo and Hundley and Jenkins. Of the unstoppable boys of summer. It was more a cautionary tale though than a fairy tale; something from the mind of the brothers Grimm rather than 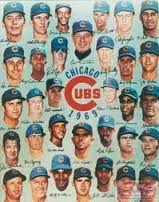 Disney. Those unbeatable Cubbies took a headfirst downhill tumble late in the season. The ’69 Cubs not making the post-season was a nearly statistical impossibility and yet it had happened. They’d been on top of the world and then they fell and they fell hard and they lost and that’s when we, the collective we, started hating the Mets.

Prior to that magical and cursed year, there wasn’t much of which to brag until you counted backwards to 1945. 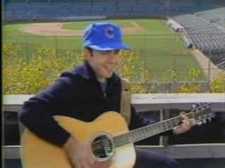 As Steve Goodman wrote in his song, “the law of averages says anything will happen that can, but the Cubs haven’t won a National League pennant since they year we dropped the bomb on Japan”. If eleven years is a lifetime, thirty-nine years was practically prehistoric. Hitler and Nazis for real not just in the Raiders of the Lost Ark, the Soviet Union was on our side, back before the Bridge Over the River Qui was a whistling tune, and back when Japan had an Emperor and would send Kamikaze pilots to crash into American warships, before they were our source for Sony TV’s and Donkey Kong. Not only had my parents not yet been born, but my grandparents were still young enough to have natural hair color and their own teeth! That may as well have been three days after the crucifixion of Christ as far as I was concerned. 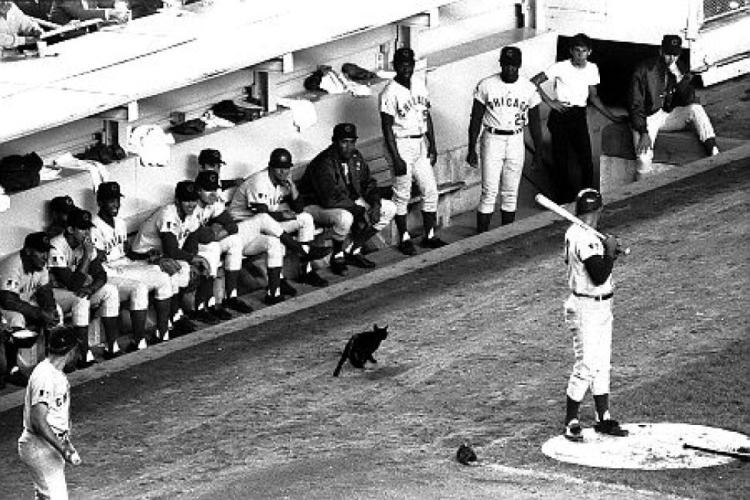 But these were the color television, MTV, Cold War days of 1984. Ghostbusters and Indiana Jones were in the movies, Van Halen was on the radio, and about two-thirds of my wardrobe consisted of Cubs free giveaway t-shirts – Cub emblem on the front, some form of Vienna Beef ad on the back or better yet, a bold announcement declaring the shirt was courtesy of Old Style beer. I went nowhere without my dingy, sweat-stained, plastic-snap adjustable Cubs cap on my head. At the time I was going for an all-American-leave-it-to-beaver-Bad-News-Bears kind of look. Sadly, what I had was more of a Eugene-from-Grease-when-he-was-on-Punky-Brewster kind of look. In any event, the Cubs were on top, and for the first time in my short life, it was cool to be a Cub fan.

By September, the bandwagon was overflowing. Lakeview was hopping and day-baseball was all the rage. Ryne Sandberg was the star of the show while Harry Caray sang the praises of Jody-Jody Davis to the tune of Davy Crockett, Leon ‘The Bull’ Durham covered first and swung one heck of a bat, while veterans Ron ‘the Penguin’ Cey, and Larry Bowa rounded out the animal infield. And on the mound, dominating baseball was the Red Barron himself, Rick Sutcliffe. No more were ‘we’ the loveable losers. No more were we just old ladies in floppy hats and unemployed drunks. Nope, the Cubs were on top and the nation was watching. Suddenly Cub fans came out of the woodwork. Everyone from Hollywood superstars to President Reagan came out of the closet with their hidden Cub fandom. Lakeview became Wrigleyville, the Cubs became America’s team, and Sox fans became quiet and bitter.

That’s when I learned about the magic number, what it meant and how it worked. ‘Magic Number’, that’s the phrase

, the one that’s been bandied about so much as of late. That summer, when I’d first learned of it, it was the Mets and the Cubs again. I followed the magic number as it dwindled. Those Mets weren’t going to get ‘em this time around. And on a 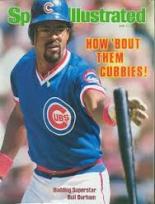 September night, 3 months before my family owned our first VCR, my Cubbies clinched the NL Eastern Division and a spot in the post-season for the first time since “we dropped the bomb on Japan”. It wasn’t the National League pennant, but it was something special, and the way the Cubs were playing,
1984 was going to be the year Chicago got to the World Series again. Even the other side of town hadn’t been there since ’59. The doldrums were over. The skies had cleared. The curse had been lifted. The streams had been crossed and Gozer the Traveler had been sent packing. The sun shone over Wrigley Field once more. A wide-eyed romance with fall baseball bloomed in a little boy too naïve to know to be wary of romance and its many pitfalls. They would win. It was almost certain. Everyone said so. Th 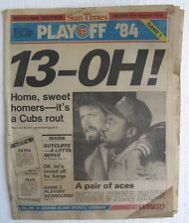 And then it happened.   Reality struck and it struck hard delivering a blow that would knock the breath from young lungs. San Diego took three in a row and the newspapers declared the magic number to be 1985.   Which of course it wasn’t. They went 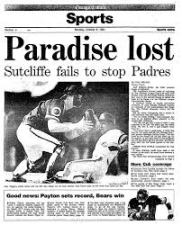 What had changed by ’03 was that it wasn’t my first time around this block. I was a virgin no longer. I’d been in love and had had my heart broken, more than once. I’d tasted the bitterness of love that rises when the sweetness dissolves. I’d been pushed aside by one who was supposed to be destiny. When wounds heal, the scar tissue toughens the once tender heart.

That night, the night of the Bartman game, I was standing in the beer garden of the Piano Man bar at Clark and Grace, about a block north of Wrigley Field, watching the game with co-workers. It was the seventh inning and the Cubs were up 3-0. My friend, a woman from

Michigan who was new to this Cubs thing, turned to me and said, “I thought you’d be more excited. Why aren’t you excited? They’re winning.” I replied, “Because I’ve been here before. It’s still too early to get excited.” At the end of the 7th, we made our way south to Waveland and Clark where the beer gardens of Bernie’s tavern and whatever bar was on the opposite corner that year had merged as spectators jammed Waveland Avenue to catch a glimpse of one of the nearby TV’s and hear the roar of the crowd from the ballpark behind us.

Again, the air was electric. I cracked open that door of hope just enough to let a sliver of light in. It was pretty late in the game now. Was it too early still? Top of the 8th, three run lead, one out. Maybe this time was different. 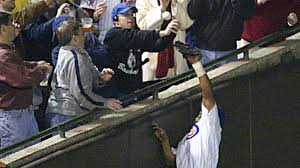 In his defense, he wasn’t the only one to reach for the ball, he was just the unlucky one to touch it.

Then, from high above, someone with a giant vacuum sucked all the air out of the neighborhood. Bernie’s was silent. The other bar was silent. Waveland Avenue was silent and that ballpark, spilling over with fans, was silent. It unfolded slowly and painfully. Eight runs later and I knew we were done, not just for the game, but also for the year. There was still another chance, a game seven, but you could feel it, a tangible thing – loss. Again.

She’d done it to me again. She keeps breaking my heart, but I can’t let her go.

What do you say about a guy who keeps going back to the same woman expecting different results only to have her crush him time and again? Hopeless romantic or simple idiot? Optimist or Fool? I don’t know. She’s done it to me before. But maybe this time will be differe 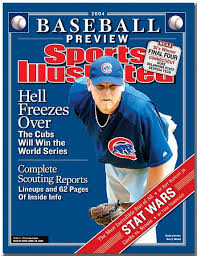 Yeah, they’re good. Best team in all of baseball and have been since April. Dominant pitching, a lights-out closer, and bat after bat after bat that you just can’t pitch around. If Bryant don’t get you, Rizzo will, and almost assuredly with Fowler on base.

And so, as the magic number dwindles down to zero, I wi 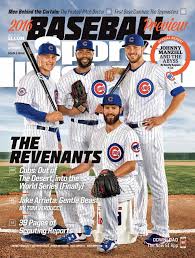 ll venture into this post-season in much the same way I venture into any romantic relationship – with trepidation, cautious optimism, and a nagging sense of impending doom.

But really, this time is different. She’s come back to me, and she’s changed. Really, we’re going to be happy this time. 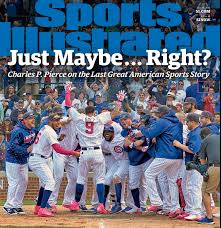 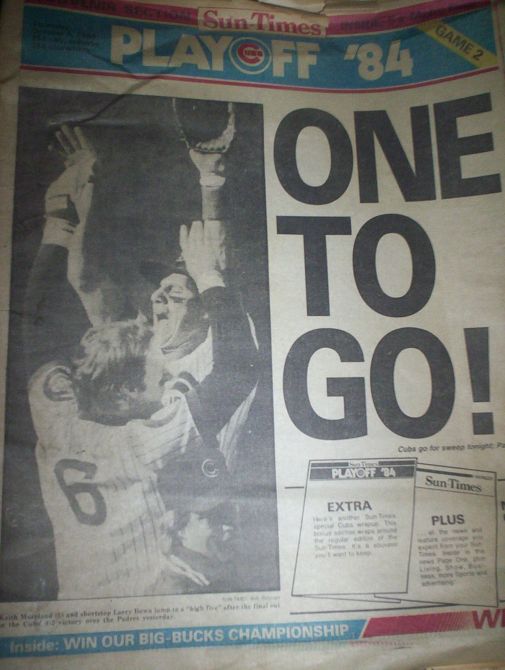 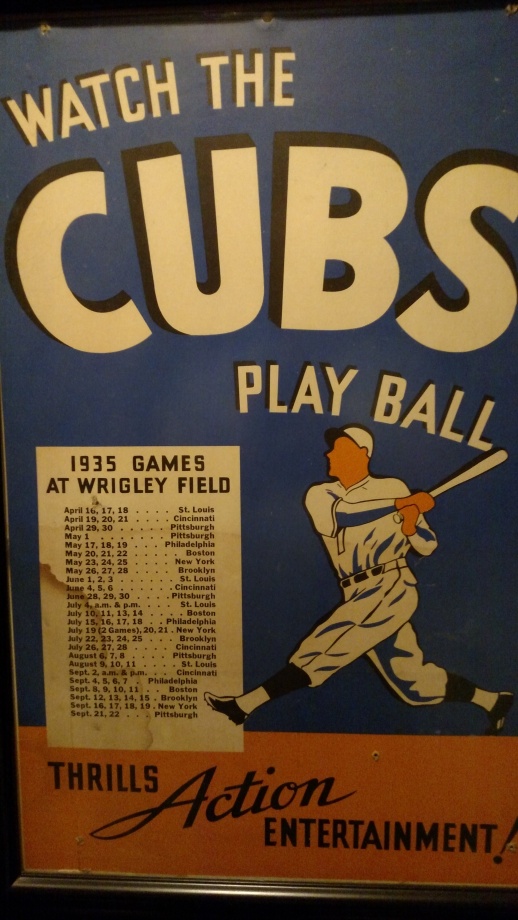 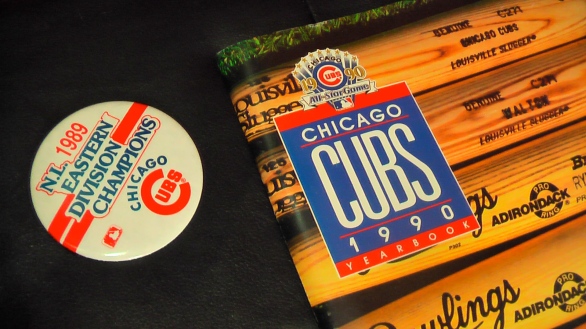