These people show us one side of themselves. Often a very calculated one. They market themselves to us in a certain way, and though in some cases it is a very different person than reality and in others it isn’t far off, it is just one part of a multi-dimensional person. We invite them into our homes and they make us laugh and that brings them close to our hearts because it’s hard to not like someone who makes you laugh, and we feel connected to them, like we know them. We watch interviews, we see them goof off on Letterman and Carson and Leno, and we see them open up on Charlie Rose or Barbara Walters and we feel we know them from all angles. The truth is, we don’t. If we’re honest, we don’t know the first thing about the actual person, who they are when the cameras aren’t rolling and the lights are down. We see the smiles they give us and mistake them for their own smiles, after all, how can someone who is miserable be so funny?

Simultaneously we hold them to an inhuman standard, as if being entertaining and living in that little box in the family room makes them some other species. But they’re just people. No different than any of the rest of us. We see the fame, the fortune, the ‘love’ showered on them and think, ‘how could anything be wrong in their life?” But fame and fortune don’t bring happiness, and what we see as love is not real love.

We don’t know the demons people battle, even those closest to us, and sometimes the ones who seem to shine the brightest have the darkest storms to overcome. Depression is real. It’s funny to see how judgmental some people can be regarding suicide. No one in their right mind would end their life in such a way, and that’s the point. Depression can take hold in a way so that you are no longer in your right mind. It’s sad, not cowardly. It’s tragic, not sinful. And though we didn’t really know Robin Williams, we can mourn for him and for his family, because when someone makes you laugh, it’s hard not to feel connected, and nearly impossible to not like them. 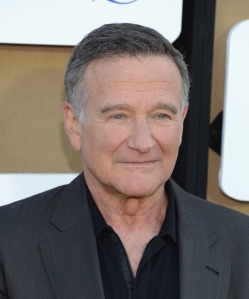 One thought on “The Strangers We Know, RIP Robin Williams”