I took a slow drive past the old Stevenson Arms dorm today. Homecoming weekend has been fun, but it’s almost time to head back into the present time. As Tom Petty says, ‘you can look back babe, but it’s best not to stare’. So before I jump in that time machine that brought me back here, I want to reflect a little on life and the time I spent here and the dash of time between then and now. 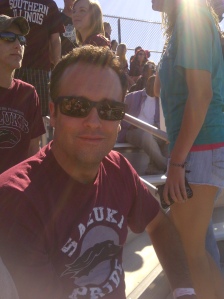 The first feeling that struck me as I rolled past the backend of the dorm building (which by the way hasn’t changed at all from that perspective, sans the blue instead of maroon door) was what a short time in our lives it was. Though it was a constant stream of students, a teaming bubbling flow of life, it was also a constant shifting of individuals, To a casual observer looking in from outside, that river never changed, but for those of us riding that wave we saw changes.

For me, I was a part of that current for three years. And in that short amount of time, both the dorm and I changed immensely. It was not the same place I had first moved into in the fall of 1990, but I wasn’t the same person anymore either. It’s that time of life. Lots of changes, and they are big ones. In childhood, because you’re growing physically as well as mentally and emotionally, it’s easy to see and expect those big changes, but by seventeen, they kind of take you by surprise, sweep you up and carry you to a new place swiftly and not always smoothly, but almost imperceptibly.   I think that’s part of why this place is so dear to me. I did so much growing and learning and becoming who I am there. That’s where my adulthood started, though ‘adult’ might not be the most accurate word I can use to describe what I’ve become, but it’s the best I’ve got right now.

The part that is so difficult to grasp and completely understand is the randomness of chance and coincidence that conspired to bring me what has essentially turned out to be, simply put, my life. I hadn’t planned on attending S.I.U., but once it was decided (three weeks before school began), the dorms were all full. There was one dorm with room. Most years, this was one of the more difficult dorms to get into, freshman/sophomore approved, but off-campus and co-ed floors. Due to a computer malfunction that year, rooms that were normally booked were available. I got in.

I knew almost nobody in Carbondale. The one or two people I did know were older and lived in apartments and townhouses off campus and I really didn’t know them that well. Again chance stepped in and the lady who ran the dorm assigned me to room with the only other seventeen-year-old male in the building. He spent all of five months as my roommate and the last twenty-one years as one of my closest friends. 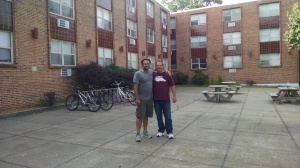 That fall was the first year the University closed the campus and dorms for a week over Halloween and we were sent home. Mike was from Las Vegas, so I brought him to Chicago to stay with my family for the week. There he met his future bride and mother of his children and forged life-long friendships of his own in what I’m sure for him was a most unexpected place.

You see what I mean about the randomness of the whole thing. Fate, God, Luck, Chance, a random roll of the dice brought certain people to this one certain place in this one precise moment in time and set us on a path from which we could never again veer off. That is life, isn’t it? And because of those random chance encounters and unconscious decisions it is what I call ‘My Life’.

I think of the people I met here. Some friendships are the enduring kind, others are people I’ll probably never see again on this Earthly journey, but all of them are with me in that strange, hard-to-describe way. Avion with whom I was a student janitor for two or three months and with whom I went to the shooting range once is still vivid in my memory in a way in which I almost expect to run into him around campus one day when school resumes and neither of us will have changed. The mind plays tricks on you that way as the universe secretly steals time away from you.

Then there are the friends who I talk to every few years or so. Thanks to Facebook we can keep up more often without too much hassle. They are those kinds of friends who, even after ten years of not being in the same room together, after about five minutes it’s as if nothing has changed… as if life hasn’t moved much. Of course it has. It’s the connection, the shared experience of that crucial time in our lives that stays cemented and allows those friendships to pick up where they left off.

And then there are the others. The ones I haven’t seen or spoken to in the better part of sixteen years or more. They are here with me. A part of who I am. I know, it sounds like I’m talking about dead people, but I’m not… at least I hope I’m not. They’re here, somewhere on the Earth following their own path, living out their personal journey one moment to the next somewhere, but I imagine this invisible tether, one we cannot feel nor see. We came from different stations into this one hub for a short time and affected each other, and then like locomotives in the night each branched off in our own direction, each on a separate journey to that final destination that lies, with any luck, in the much distant future. But that tether is there. It’s in a song, a smell, a feeling on the breeze that takes you back for just a fleeting second to that shared place and those people who made it special to you.

And so, here I sit on the edge of Thompson Woods, twenty-one years and two months after I first ventured to this place. I’m waiting for the Student Center to open so I can use the washroom and get a Starbucks for my long ride. The woods here on campus was always a place of reflection for me… a calm, serene escape from homesickness, classroom stress, worry and longing for my girlfriend hundreds of miles away. A venture off the beaten path even if just for a few minutes walking from one class to the next, taking the wooded trail through Thompson instead of across the campus was a respite, a rejuvenation of mind and spirit between lecture halls and lab hours. Much needed because, of course, not all the time I spent here was good. I know I’m looking back at it more romantically than realistically, but isn’t that what the past should be… at least sometimes?

I’m grateful to have this place to visit. I’m grateful to have had the chance to visit this place with Mike again, and with his daughter and her friends. It’s kind of like being suspended between two places in time. But the thing about this journey we’re on is: the changes keep coming. They should keep coming. I feel I have just recently awoken from a decades long sleep… a fear induced walking comatose state. I’m awake now, and for the first time in a very, very long time I feel alive, and new, and ready to tackle those things I had previously allowed fear to keep from me. No more. So many lost moments and so many lost opportunities to become the ‘me’ I always wished I were. I feel a little like Dorothy coming to the realization that I had the power to get what I’ve wanted the entire time. Maybe I had to go through it all to get to this place, but I’m glad I’m finally here. So in a way, today as I leave S.I.U. again, I do so to face an uncertain but wide-open future of possibilities, but this time I’ll do it awake. And as I do, I take with me this place, this place that has given me enduring friendships, chance encounters that touched and changed my heart, and some of the most precious memories of my life… we are all tethered together by that force of nature that by chance brought us together and gave us this invisible link that lies within us and that force that set us on our way.

I thank God for that randomness of chance. It is the unplanned and unexpected moments of my life that have changed it and shaped it the most. Go ahead, keep making your plans, just don’t fight the current.

Starbucks is open. Time to hit the open road. 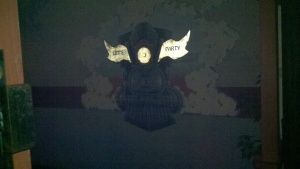 From my favorite Carbondale bar, Sidetracks

5 thoughts on “The Conspiracy of Chance: A Middle-Aged Man at Homecoming”